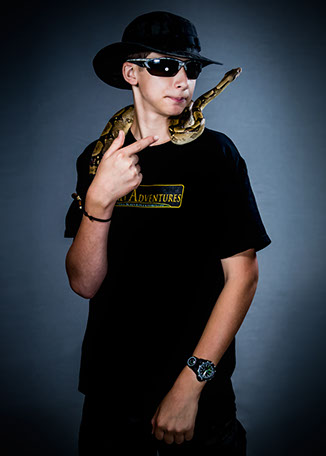 Pierce Curren is the young host of Scaly Adventures, an E/I broadcast television series with worldwide distribution.  In every episode, he leads viewers on fun, educational journeys sharing his immense passion for some of the most incredible and exotic animals in the world.

Pierce has always loved animals, and his compassion and care for different species shines through each Scaly Adventures educational video and television episode. He cares for a variety of species in his personal collection and has had numerous hands on experiences filming with experts in a wide variety of fields.  He is also a Second Degree Black Belt in Olympic Tae Kwon Do with Palmetto Martial Arts School.

Pierce is a founding member of Boundless Limits International and a home educated student.

At the start of Scaly Adventures in 2013, Pierce was the youngest person in the world hosting a show in the Animal & Adventure genre with worldwide distribution!